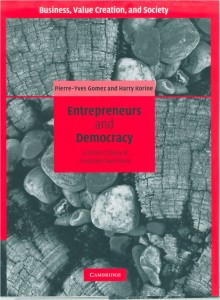 This analysis demonstrates how capitalist enterprise has been scripting the political realization of the liberalist project for over two hundred years now. The dominant concept in political science sets the State and the market in an opposing tension to establish an essentially ‘liberal’ or ‘social-democratic’ balance. Political and economical spheres are scrupulously kept apart.

The analysis set out here demonstrates this perception to be flawed, since it overlooks the fact that the firm is first and foremost a political organization, incontestably the singlemost important driver in today’s societies. The determinant interplay is therefore between the State and the firm. The entrepreneur, as driving force guiding independent private-sector energies towards the successful completion of economic projects, is a key protagonist in taking the Enlightenment’s liberal project from the utopian page to real-world centrestage. Historical analysis in fact highlights how the entrepreneur has emerged to share the same trajectory as this deployment of this political project. The State’s role within this framework is to constantly re-question entrepreneurial power so as to maintain acceptable limits for individual freedom. This it does via two mechanisms: the market, which creates rivalry between firms, and democracy, which legitimizes power by splintering it. The State/enterprise face-off engenders two counterforces: on one side, entrepreneurial leadership, which tends to curb the dispersal of individual energies driven by individual freedoms, and on the other side, the increased splintering of power in modern society, which is preprogrammed to refuse any clustering of this liberty-restraining power. It is the tenuous balance between these two opposing forces that has spawned corporate governance as a means to discipline humans through economic production. The book takes this voluntarily simplistic model as a basis to develop a radical theory on the patterns of societal change: deployment of the liberal project has tended to tendentially democratize corporate governance, and over a period of centuries. The net result is that it has progressively blurred the distinction between legitimate Public-sector (the State) power and legitimate Private-sector (enterprise) power. The ultimate conclusion is that the State’s purportedly weakening grip over the ‘marketplace’ – a much-discussed focus of contemporary debate – is in fact an illusion. What is actually happening is that Firms are increasingly absorbing traditionally State-led functions, and consequently flooding the political scope of influence. This theory is meticulously developed through in-depth cross-disciplinary analysis in the three core strands to have focused on corporate governance research: political philosophy, history, and economics. We begin by exploring how the opposing tensions of entrepreneurial force and social fragmentation have been scripted into contemporary political philosophy since the pioneering debate on political liberalism between Hobbes and Locke, and how they are at the source of legitimate governance in capitalist firms.

In the second and most substantial section, the authors show how three core systems have successively stemmed from the roots of capitalism to form the reference framework defining ‘good’ governance: first the family-centred system, then the managerial system, and finally on to what we term the « public » system. This pattern of change reflects a tendential democratization of corporate governance.

Section three explores the issue of how these shifts have impacted on economic performances. Our interpretative framework is critically compared against the economic theory recently championed by neoliberal schools. We demonstrate why the 1970s marked the start of a shift in corporate governance towards increasingly financially-driven precepts. Modern economic theory, based on shareholder power and financial power, has proposed little more than simply rebottling the fundamental paradigm of liberal political philosophy: balance out unifying entrepreneurial force and State-governed social fragmentation.

We conclude by outlined the foreseeable developments that can be expected for ‘total’ capitalist enterprise, which harnesses globalization to sidestep public-authority regulations, soaking up society as a whole in the process. We have sought to ground our analysis by avoiding the all-too-easy tendency to base all-encompassing thought on data from a single country or region. We have therefore elected to systematically illustrate our assertions by cross-comparing data from four nations: the USA, the UK, France and Germany.